Why are You Paying these Hidden Parcel Rate Increases?

Here are three hidden parcel rate increases that impact all parcel shippers, as well as some tips for responding to them.

We’d all like to think that our business partners and vendors use full transparency when billing for their services. This isn’t always true in the parcel arena. Operating in an extremely dynamic environment, these providers are known for implementing extra charges onto their invoices without giving fair warning or even explaining what those fees cover.

Because of this, the onus is on the shipper to ferret out and question these charges, knowing that some are probably legitimate while others may be questionable (or in some cases, completely unwarranted). The year ahead won’t be any different, with parcel shippers passing to the customer additional costs on everything from fuel surcharges and handling fees to peak season charges.

These are the kind of rate increases that carriers are not going to publicize. You have to dig in and find them yourself. 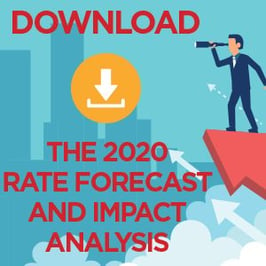 A major cost component for all shippers, transportation deserves the attention it takes to uncover hidden charges and then either prepare ahead for them (or, address them with your parcel carriers).

Here are three areas that all companies should keep a close eye on in 2020:

Originally meant to protect parcel carriers when gas and diesel prices were high, fuel surcharges have withstood the test of time and are still being levied (even though fuel prices have since receded). Parcel carriers like UPS and FedEx publish information about their fuel charge increases—which have crept up at regular intervals over the last four years—but don’t always “announce” these increases. That’s why these charges qualify as “hidden,” and all shippers should be aware. With fuel prices entering a new era of volatility in mid-2019, expect to see more of these changes ahead in the next 6-12 months.

Just like your credit card companies like to surprise you with new rates, terms, and guidelines without prior notice, parcel carriers continually tweak their agreements. Not all of the “new” terms will be favorable for the shipper, which is why all companies should keep an eye out for these changes. For example, just a slight change in wording in a service guide can add up to significant hidden fees for the shipper that uses parcel to get its goods to end users. A change in calculation for dimensional (DIM) weight for international freight, for instance, could move that 10.2-pound package into a completely new pricing category. The same goes for terms and conditions, which carriers typically update multiple times throughout the year. If you’re not reviewing them on a regular basis, you may be paying more for shipments without even realizing it. You’ll also be missing out on the chance to change your own shipping operations in order to take advantage of lower rates.

Like any industry that follows logical supply-and-demand cycles, parcel shipping ebbs and flows throughout the year. Knowing that the November-January timeframe is when e-commerce revs up and holiday shippers kick into gear, parcel shippers generally up their rates on certain shipments during this time of the year. In August, for example,UPS announced a peak surcharge for large packages, those that exceed maximum limits, and any that require additional handling. This is an important point for shippers whose incentives are impacted during these peak season windows. It is something to watch out for as we move into the 2019-20 holiday season.

Shippers that monitor these and other hidden rate increases will be best positioned to either avoid them completely or minimize these costs by making the necessary shifts in their own logistics operations. Companies should pay special attention to any rate increases that might be buried in their carriers’ service guides, and that aren’t officially “announced” to the public. Even just a slight change in the verbiage can have a major impact on your rates.

Want to know more about the hidden parcel fees that could be killing your transportation budget and what you can do about them? Transportation Insight’s 2020 Rate Forecast and Impact Analysis offers our insight on rates, surcharges and accessorials. It equips shippers with the knowledge they need to forecast rate increases and plan their strategies for the year ahead.

View Bio and Past Posts

Holiday Shipping 2020: Will Your Parcels be Picked Up and Delivered on Time?

More than a freight forwarder. We’re your eyes on the open seas.